Who Was Bill Jewett?

Bill Jewett was a long time OPSIG member and an avid operator, and especially a gracious and kind friend to anyone who showed an interest in trains and operations. He revived the OPSIG in 1997 and ran it for almost ten years, not only constantly promoting the organization and organizing sessions and events, but also editing and producing our journal, The Dispatcher's Office. Many of us who joined the group back then came to know Bill, and in fact joined up as a result of his infectious enthusiasm and promotion of the art of model railroad operations. He was Mr. OPSIG for so many years.

Bill passed away unexpectedly on January 1st of 2006. His train collection was sold and the proceeds were used, at the request of his family, to start the Bill Jewett Memorial Fund, which supports the Bill Jewett Award. The award is given annually to the individual who promotes and contributes the most to the Operations Special Interest Group and its stated goals of promoting the art of prototype model railroad operations. 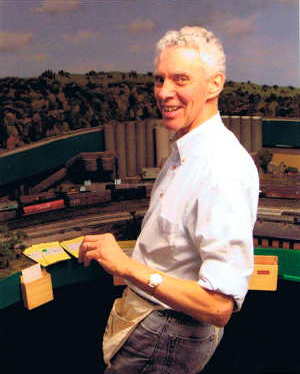 The Operations Special Interest Group most often requests nominations for the annual Bill Jewett Award in the late winter/early spring of the year, so that the Award may be presented at the OPSIG's Annual Meeting at the NMRA National Convention in July.

The winner of this Award will receive a $250 cash prize, a plaque and a feature page in the DO about them. The Bill Jewett Memorial Fund (not the general OPSIG revenues) funds the Award. Nominations are to be sent to the OPSIG Secretary by June 1. The winner will be decided by unanimous Board decision.

The nominated individual must be an OPSIG member and all current Board members are not eligible. Of particular interest is the candidate's involvement and efforts in the OPSIG's quarterly publication, The Dispatcher's Office, which Bill took over and published for ten years. Please email the Secretary the name of your nomination, along with a short paragraph as to why you feel this individual should be considered.